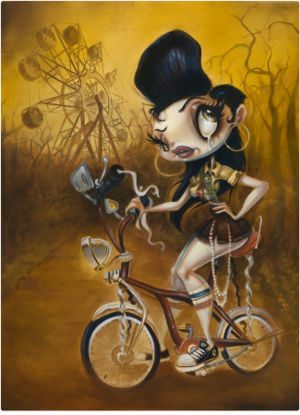 Having grown up on the West Coast most of my life and coming from a family of uber ‘antique’ collectors and artists, my eclectic upbringing was filled with a wide range of ’Pop’ ephemera. Many of those inspirations now show up in my work and stem from the backdrop of my childhood.

The Subject of my paintings is a world of side-show icons, deviant Animalia, and ‘masked’ glorified cartoon alter egos. I utilize these icons and character cultures as antithetical counterparts to what we are lead to believe as being innocent and socially acceptable. Although misfits on the surface, a sense of relation is understood, secret from the public - we are all misfits; hiding behind animated personas, odd and beautifully unusual. Who is it that we relate to? The lonely little boy hiding in a bear suite, the evil lustful pool-hall wolf, the sexualized little girl who secretly wants more. The environment and its limited population are meant to conjure these questions, the viewers are confronted with finding their own answers.

Brandt Elling Peters is a self taught artist currently living in Tampa, FL with his wife, fellow artist, Kathie Olivas (who as well is exhibiting internationally) and their two dogs Bailey and Diego. He has been exhibiting in numerous galleries across the US & Canada.

These are toys designed by Brandt.

These are toys that Brandt has lent his design skills to.

These are one-off pieces by Brandt.