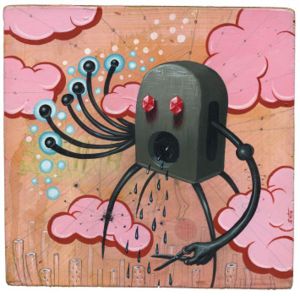 Environmental issues also take precedent for Soto, who is concerned with conflict of humans trying to harness, or take advantage of nature. His paintings exude this tension, as robotic creatures duel, organic tentacles and flower bouquets thrive, and black smog looms amidst floating, ominous skulls.

In 2002, Soto graduated with Distinction from Art Center College of Design in Pasadena, California. He currently lives in Southern California, with his wife Jennifer and daughter Shannon.

These are toys designed by Jeff.

These are the various toys that Jeff has contributed his art to.

These are one-off pieces by Jeff.