From Vinyl Creep
(Redirected from Deeten)
Jump to: navigation, search 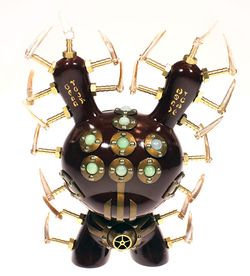 I’m a LA based artist that customizes toys as a hobby and for the love of making something with my hands in a digitally oriented world. My work is influenced by the 1920′s era as well as modern toy art and their artists. Some other influences include art, deco, space westerns, urban cities and drag queens. I mainly work with vinyl toys, acrylic, sculpey clay, and other various materials I find can be of use. I find each custom can be approached differently while still maintaining my style. Each piece evolves as I start making them and they never go 100% according to plan which means a better piece in the end. I figured, I love so many styles, why not create one that mixes them all. Customizing is part of my life now. I love the toy community and plan to be a major artist within it one day.