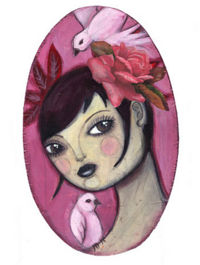 Sister of Miss Mindy, CJ Metzger creates paintings and mixed media pieces acrylics and oils that blend surreal and whimsical imagery. Her exhibition history began 8 years ago, with her artist sister (Miss Mindy) and a band of diverse artisans that were determined to bring their, now termed - pop-surrealism - genre of art to the art to the public eye. In doing so she found that people really adored the more character based and folk art inspired pieces she created and found them unique and refreshing. Her work transcends basic illustration through their narration coupled by compelling intent.

Currently there is an increased appreciation for this genre and CJ is becoming a notarized participant in the scene, with a careful and well thought-out approach to her work and an unparalleled dedication to her craft.