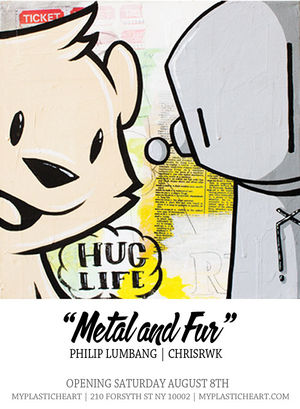 myplasticheart presents Metal and Fur, featuring the work of artists ChrisRWK and Philip Lumbang where the melding of their unique styles bring together an east coast meets west coast collaboration. Both share similar influences ingrained in a common graphic/illustrative style that is most notably demonstrated in many of the murals and walls both have adorned over the years in the streets of NY to LA. Philip whose iconic Awesome Bear character is often seen on walls and abandoned lots in downtown Los Angeles helps to spread Phil’s message of fun and happiness along the way. Chris started doing graffiti as a kid growing up in Staten Island and has evolved his ominous character Robots Will Kill. The two artists bring their collective influences to the table where they explore the dichotomy as well as parallels in their work with solo pieces as well as fully collaborative works. Through this joint endeavor you will see a growth in their visual verbiage and a willingness to come out of their comfort zones.