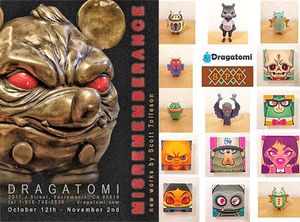 Misrememberance was a solo show by Scott Tolleson hosted by Dragatomi. Be wary of your childhood memories. Things that were once treasured may have a darker, sinister side. This show will feature new resin sculptures, canvas prints, custom figures and an exclusive Hot Pink Deadbeet."