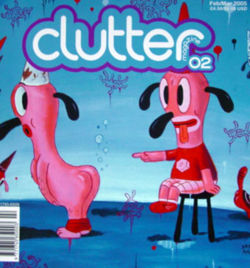 Originally UK-based with an international perspective, Clutter is the first English language magazine to focus on the designer toy phenomenon. Combining in-depth interviews with the scene’s leading figures, forthright editorial and outstanding photography and design, it’s rapidly establishing itself as the toy collector’s must have read.

Clutter was founded in September 2004 as we felt there was a lack of information out there for the collectors of Designer Vinyl toys. As collectors ourselves we became increasingly frustrated with this information black hole. On graduating from University with degrees in Graphic Design we decided to do something about it. After speaking with collectors, designers and manufacturers we realised just how big the demand for information was… the response was truly amazing!!

At Clutter we understand the relationship between many of the more underground movements, and draw strong links between ART, TOYS, SKATEBOARD CULTURE, GRAFFITI, MUSIC, and FASHION! This approach has resonated with our own readership which is as diverse as our outlook.