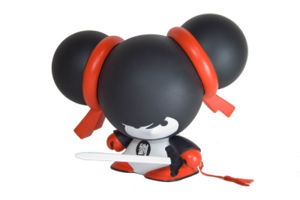 During the Qing Dynasty, one single house was regarded throughout China as having perfected the art of sword crafting - the House of Liu. The House's own sword fighting styles and skills were unrivalled as well. It was because of these talents and strengths that the Manchurians felt unease with the House of Liu.

Late one night, a large Manchurian Army was sent to ambushed the House of Liu while the inhabitants were asleep. The soldiers were able to kill everyone in the House due to their element of surprise and their vast numbers. They even burned the House down to the ground as they left. The Manchurians believed that their fear was finally over... but in reality, it had just begun.

What the Manchurians didn't know was that there were two competitive best friends absent from the House of Liu on night of the ambush. A little girl nicknamed 'Mei Mei' and a little boy nicknamed 'Di Di' had actually sneaked out of the House earlier that night to play.

When Mei Mei and Di Di returned to the House of Liu, they were filled with disbelief in what they saw. They knew instantly that the Manchurians were behind the ambush and that they must avenge the deaths of their friends and families. The best friends promised in a joint declaration to protect each other and to destroy their enemies in the name of House of Liu.

"Protect and destroy" soon became their motto of choice.

The toys are designed by James Liu and produced by Crazy Label.