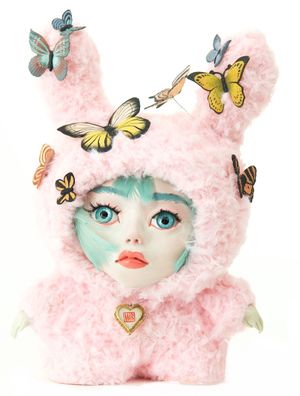 Mab Graves is a Contemporary Pop-Surrealist artist and illustrator living and painting in a converted 1800’s tavern in a small corner of the dusty American Midwest.

Her work is inspired deeply by fairy tales and old classic literature. She adores narrative. She blames this on her parents who unrelentingly read aloud to her and her three sisters as small, impressionable children.

Mab’s passion for creation has been an overwhelming obsession since she could grip a crayon, at about the age of 6 months. She spent her childhood and teen years adoring graphite and pen mediums (but being very suspicious of paints) until she discovered painting in early 2009, and then it was all over.

A self-taught artist, Mab’s work has been shown is galleries both nationally and internationally. Her work has been sold in more than 56 countries. Mab’s art has appeared in many print articles in books and magazines and in 2013 she published her first book of paper dolls with Dover Publishing.

She currently lives, works and dreams in Indianapolis, IN.