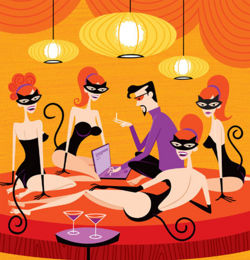 Shag, whose real name is Josh Agle (he took the last two letters of his first name and the first two letters of his last name to create his artist moniker), is a Southern California-based artist whose work reflects his love for tikis, primitive art, and vintage movie and television themes. His vivid and colorful paintings often display characters who lavishly partake in consumerism and are often in the middle of a situation that the viewer can interpret as well as enjoy visually.

These are toys designed by Josh.

These are toys that Josh has lent their design skills to.

These are one-off toys and figures.