Signs of the Apocalypse 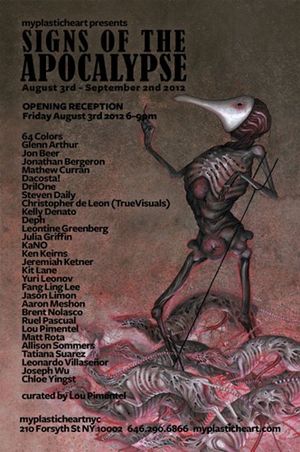 Curated by Lou Pimentel, the ‘Signs of the Apocalypse’ group show grew out of the end-of-the-world mythology linked to the year 2012. As Lou puts it, ‘The Mayans believe that the world will end in 2012, and with so many things going wrong in the world; tsunamis, earthquakes, global warming, flocks of birds/schools of fish mysteriously buying the farm; one can’t help but think about it. What do you consider to be a sign of the Apocalypse? I invited some of my favourite artists to translate, and give life to the fears living in their heads.’