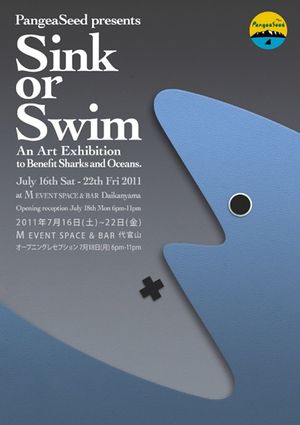 PangeaSeed is a Tokyo based organization who educate and raise awareness of Shark conservation and preservation. Taking place this Saturday, July 16th is their 3rd annual art exhibit, ‘Sink or Swim’, which focuses on the mass depletion of sharks. All of the proceeds from ‘Sink or Swim’ will go towards helping sharks keep a float not only in Japan, but the whole world. PangeaSeed will also be donating a portion of the proceeds to help animals effected by the recent Earthquake in Japan.

With each minute that passes close to 200 sharks are killed, adding up to an astonishing 80 million deaths each year. The majority of these sharks are killed only for their fins to satisfy an unsustainable appetite for shark fin soup in Asia and other parts of the world. In the cruel practice known as “finning,” the shark is hooked and brought aboard the boat where its fins are then cut off and the still alive but limbless animal is tossed back into the sea to drown.