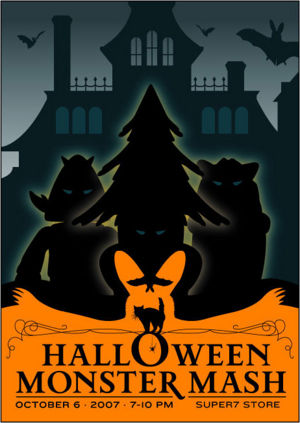 Super7 is proud to present the Halloween Monster Mash custom art show, featuring the custom figures of a variety of artists from both sides of the Pacific! Western and Eastern artists come together to create the coolest collection of customs ready to haunt your shelf for the month of October.

This show will be the first, last and only release ever for the Nathan Jurevicius' Fauna characters. Direct from MTV Canada and Nathan himself, these three monster miscreants will only be released here, and this will be a rare chance to handle these near extinct species.

Another dramatic début is the latest top secret figure from the twisted bubble-gum mind of Le Merde. A fan favourite, you know Le Merde has the rock on lock, Burger Buns on the brain and plenty hidden up his sleeves. Don't miss your chance to own the latest addition to the Le Merde arsenal of awesome.

Swooping in at the last minute is another new figure fresh from the mind of another all-star artist from the Pacific Northwest, Bwana Spoons! The brand new Blood and Guts Steven the Bat will make his grand entrance, and is sure to swoop out just as fast!