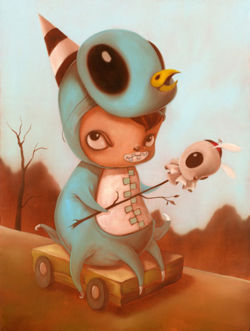 Kathie Olivas is a multi-media artist who resides in Tampa , FL and Albuquerque , NM . She received her bachelor's degree in visual arts from the University of South Florida in 1999 and is currently working on a book of her work and a line of limited edition vinyl toys.

Sugary treats, dichotomous dreamlands, and the cute and corrupted all find their way into the brief calm before the rebellion featured in Kathie Olivas's art. This series of paintings and custom figures focus on imperfect characters that parallel a vision of post-apocalyptic conformity, uniquely documenting their own stories in a mysterious brave new world.

The cast is inspired by early American portraiture that often depicted children as small adults in an idealized new land. They evoke a sense of temporality; childhood serves as a starting ground, a place where things begin. Children also personify "cuteness" as more of a representation of projected innocence. The comfort in this ideology comes into question when these sweet creatures have other ideas such as how to protect themselves or how would they be able to adapt if they chose to be independent. Once isolated in a war torn environment, they are forced to develop their own defense mechanisms. Parasitic Haze focuses on the ambiguity and fleeting moments surrounding the uprising. The unapologetic anti-heroes guide us through the mysterious lands questionably untouched by human destruction. A minimalist haze fogs what could be the illusion of this dreamland or what could possibly be the reality of destruction and decay after complete and utter annihilation. Their mutated limbs, empowered sidekicks, or improvised armor present a satirical look at how fear affects our sense of reality.