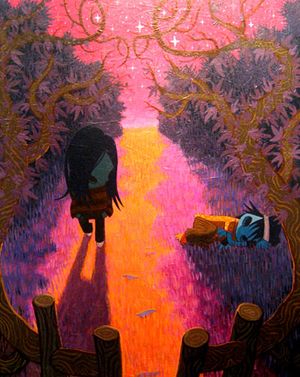 Born in Cardiff, Wales, in 1969, Pete Fowler is one of the most-recognized graphic designers of our time. Although he has a Fine Art background (he was educated at the Falmouth School of Art), Pete is currently working as a freelance illustrator, artist and monster maker; his clients range from Sony Creative Products, Vidal Sassoon, and Faberge to Super Furry Animals, Tatler and the Sci-Fi Channel.

Pete works mostly in the UK and Japan for his company Pete Fowler Ltd. His work includes a self published comic 'Slouch',. two films for the Super Furry Animals DVD 'Rings Around the World': Receptacle for the Respectable and Surfer Girl, and graphics for Satan Arbeit - a clothing brand from Osaka he has worked with for the last few years. He mainly designs the prints, logos, textile patterns, promotional items, illustrations and store painting for them.