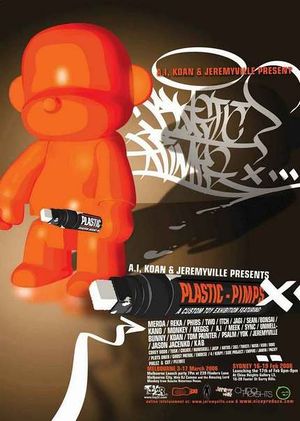 In the land Down Under, commonly known as Australia, Qees are getting out of control. At night when nobody was around they would come alive and stalk the dark streets, looking for unsuspecting victims, whom they would stab with what ever they could find, broken bottles, pieces of metal even hubcaps. Single-handedly A.I and Koan have rounded up 45 of these demonically possessed plastic toys, removing their retched souls with the help of the voodoo witch doctor Mr. JeremyVille. They were all given to a range of talented artists, including graffiti artists, tattoo artists and one house painter to customize.