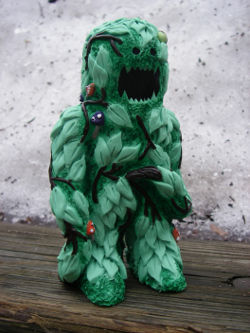 "We Kill You does not support violence. The name comes from the expression "You Kill Me!" used when something is really funny. Based out of Toronto, WKY is a team of creatures: The Ghost, The Bat, The Sasquach, The Bunny, The Bear, and The Ape looking to put a smile on your face! Spreading like butter on a hot day, WKY has been seen popping up all over the place!

Starting in 2003, influenced by a lack of color, sad people and the joy of life its self, We Kill You started putting up collages of creatures because it seemed like a fun thing to do! Over time, as things started to expand a bit more, WKY realised that people were starting to notice these monsters and were enjoying what they saw so they had to be givin more! It became an Exterior Decorating project, decorating the streets by recycling and covering furniture found in the garbage with collages and covering walls of abandoned property with collages and designs. The goal is simple: make the world a happier, brighter place!

Slowly the street work turned into t-shirts, stuffed animals and all sorts of fun goodies and has been growing like crazy ever since! Artwork has been shown in galleries around North America and clothing sent all around the globe! WKY has so much more up its sleeves planned for you and will NEVER DIE!"

Based out of Toronto Canada, WKY started to make his own hand made toys in February of 2008. Since then we have seen 6 different toys. All of We Kill You's toys are hand sculpted, moulded, cast and painted by him in his studio in Toronto. To this date, all the toys have been release through his Online Store.