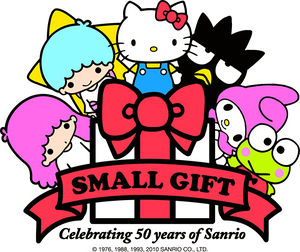 It is Sanrio’s 50th Anniversary and they will be throwing a HUGE celebration in two parts. One being Small Gift Los Angeles and the other being Small Gift Miami, which will be taking place during Miami’s Art Basel. As for Small Gift LA, the opening will take place on Friday, November 12th at Barker Hanger and will feature a pop-up shop, carnival games, food trucks, mini golf, and so much more. Jamie Rivadeneira of Japan LA invited 50 artists to take apart of this event. She asked them to create their interpretations of the many Sanrio characters, where they will be showcased at the event. There will also be 11 unique installation rooms designed by 64 Colors, Anna Chambers, Buff Monster, Crowded Teeth, Dan Goodsell, Joe Ledbetter, Neivz, Peekaboo Monster, Plasticgod, Sharktoof, and Tim Diet.