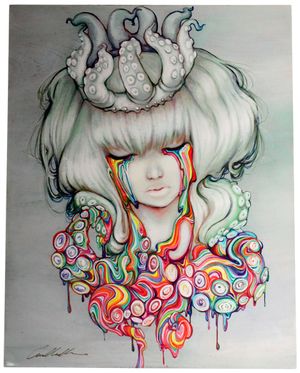 Camilla d'Errico is a product of her split heritage, Italian and Canadian rolled into one: Italian fiestiness, Canadian politeness, and an early addiction to Saturday morning cartoons and comics. Her first love was and still is comics. Growing up she was more often doodling sexy damsels and dragons on her textbooks than reading them. In 1998, Camilla first attended her first San Diego Comic Con where upon the moment she walked through the doors she realised that a 9–5 day job would kill her and this was what she wanted to do.

After a few years in the comic industry Camilla expanded her style into a variety of other ventures: snowboard decals, magazine covers, toys, clothes and the pop art gallery scene. Thanks to her relentless energy, dedication, and sleep deprivation, she has followed her dream of working creatively for a living. She is part of what may be the first art movement in Western History where women are not second-class citizens, but have an edge in the mind of the public, especially when it comes to capturing the essence of the modern woman.