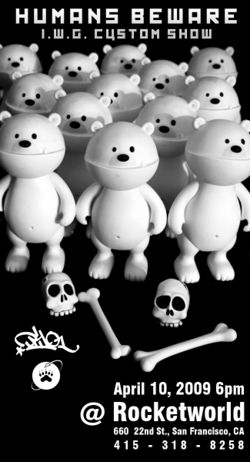 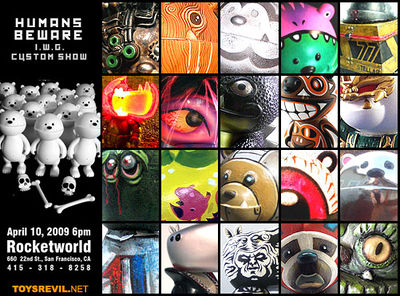 Creator of the IWG Series and owner of Rocketworld, Patrick Ma is working alongside artist/customizer DrilOne. Their goal is to put on one heck of a custom show. The platform being used will be various blank I.W.G. figures, which includes bears, rhinos, rhinos on vespas, bears on vespas, and many more.

What happens when you tell more than seventy artists from around the world to help a bunch of bears evolve and take on humanity? The Humans Beware I.W.G. Custom Show will provide the answer. Featuring seventy urban artists from a variety of backgrounds and locations around planet Earth, the I.W.G. blanks will be "evolved" from different visions of the artists. With such a huge amount of talent involved (70+ artists!), this show is one you shouldn't miss. It's sure to be talked about for years to come.

After the show, the pieces will be available online for viewing and for sale (special thanks to Big Cartel for sponsoring the store). There are also plans to do a live streaming webcam broadcast that will keep you up to date--check it out at http://blue77gallery.com/shows/iwg/ Another reason not to miss Humans Beware I.W.G. Custom Show in person, is that you'll be there for the first ever show based around customized I.W.G. toys and it'll all happen in one of the best venues there is: Rocketworld, a truly amazing gallery and store. Don't miss this show!

In the not too distant future, the mysterious Astral Overseers put into motion their master plan....an interstellar space vehicle returning to Earth unknowingly carries a specially designed cosmic retrovirus which soon spreads worldwide thru the jet stream. Completely unaffecting humans, this new retrovirus soon begins to find its way into certain animal species. Quickly causing mutations, Earth begins to see a variety of animals evolve into self-aware or sentient life. A formidable combination of all an animal's strengths, an intelligence equal to humans, and some say new powers. Immediately gaining a new and more profound understanding the danger humans presented to their kind, this new breed of sentient creatures stays hidden from human eyes for years as they develop their own society and culture, albeit somewhat loosely based and culled from observing humans and their media. An immediate goal for these creatures was to organize, and begin resisting the human destruction and domination of what was once their "natural" habitat. Strangely, as they increased in strength, numbers, and sophistication, their tactics, tastes, and habits were increasingly becoming more "human" in many ways. Full of conflict, contradiction, frustration, anger and the desire to save themselves and their world, a resistance movement emerged. The first of these resistance cells was the "I n s u r g e n t s W i l d e r n e s s G r u p p o "....