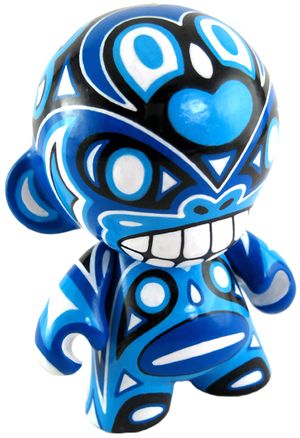 King of the Boards custom

Ryan's artistic career began very early on with his love for drawing and coloring when he was just a wee lad growing up in Southern California. During his youth, pencil and paper occupied the majority of his time, with his Atari 2600, Lego and BMX bike following close behind. Throughout his teen years he continued to draw and started to dabble with paint, and eventually went on to get a BA in Illustration and Design. Once out of school, he immediately landed a web development job at a local software company, where he still holds a full time position. All the while Ryan continued to concentrate on digital art and animation- specifically Flash, web design, 3D, and motion graphics.

Late in 2005, Ryan decided to get back to his "roots"- so he dusted off his pencils, paintbrushes and markers and returned to traditional illustration and painting. Right around that time he was inadvertently immersed into the urban vinyl toy scene as well- it started with collecting small limited edition platform toys, which soon led to him custom painting the toys himself. He's participated in custom toy gallery shows and his custom designs are sought after by the vinyl toy community. These days Ryan balances (ever so delicately) his web development job, freelance illustration and design work, custom toys, and his love of drawing and painting.